The archipelago of the Aeolian Islands takes its name from the God Aeolus. He directed the winds and freed them, all while guarding them in caves and in a waterskin in Lipari. This is one of the Aeolian islands, in which he had his palace.

It is made up of seven scattered islands as if to form a large ‘y’. Vulcano is the lowest end and Alicudi and Stromboli are the two points furthest east and west respectively.

Is the first island we meet while coming down from the north, anticipated only by almost a mile by the isle of Strombolicchio.

Stromboli is a quiet and peaceful island. Here you will find the typically Mediterranean atmosphere that can be seen in the alleys of Scari, Ficogrande, Piscità and San Vincenzo. These are the districts between which the main village is divided, at the foothill of the volcano. The lack of night lighting, which is in fact intentional, only makes the piercing light of the volcanic eruption even more impressive.

Do not miss the exclusive and also the smallest port in the world: Ginostra, located on the SW side of Stromboli.

It is the smallest island of the Aeolian archipelago, but also the most picturesque, most frivolous and fashionable of the Aeolian Islands. Everything is extremely accurate up to and beyond the details, strictly in Aeolian style. It is somewhat defined as the Capri of the Aeolian Islands. The largest inhabited centre is San Pietro. Here you can immediately immerse yourself in the ” nightlife ” atmosphere. Cars are banned on the island and people travel only on scooters and picturesque motocarozelle. The seabed around Panarea and its mini-archipelago are spectacular and perfect for snorkelling.

Punta Peppemaria is the promontory located immediately south of San Pietro near which thermal springs flow.

It is the largest, the widest and the most populated and well-equipped island of the Aeolian archipelago. An island that offers evocative, exciting landscapes, such as the obsidian flows that can be admired in the Canneto area. Or the dazzling pumice quarries that paint the sea a deep turquoise offering a marvellous spectacle to behold.

It is the southernmost island of the entire Aeolian archipelago. Less than 12 miles separate it from the northern coast of Sicily. Keep in mind that it is made up of several volcanoes: Monte Aria, Vulcanello, and the Gran Cratere. This being the highest of the three and the only one still active.

Those who sail from the West or from the East, Vulcanello from a distance looks like an islet between Vulcano and Lipari. In reality it is a sandy isthmus that unites it to Vulcano and from here the only safe bays of the island appear: Porto Ponente and Porto Levante. Behind the Porto Levante you reach the Pozza dei Fanghi, a natural thermal pool where you can treat yourself to regenerating and sulphurous mud from the island.

It is the second largest island of the Aeolian Islands but above all it is considered the green lung of the archipelago. Its lush nature communicates an atmosphere of serenity and beauty. The island is also famous for the production of Malvasia, “Nectar of the Gods”. The main inhabited centres are: Santa Marina, Malfa and Leni.

Do not miss the Pollara loop, under Punta Perciato at the NW end of Salina. The large Faraglione is surrounded by shoals, access to the bay is exclusively from the north side. Punta Lingua is also worth a stop; SE end of Salina, it is a pleasant and quiet place. The best anchorage is in front of the beach on a very irregular seabed of posidonia and rock.

It is located 10 miles west of Salina. Together with Alicudi, they form the westernmost arm of the Aeolian archipelago and are certainly the less worldly islands of the Aeolian Islands.

The beauty of Filicudi can be appreciated from the sea. In fact, you can admire natural wonders such as the dark rock arch over an intense blue sea of Punta Perciato. The Grotta del Bue Marino, with the walls in green, blue, yellow and grey shades. Not to mention the group of characteristic sea rocks of La Canna and Montenassari.

Last, but not least, Alicudi has the charm of a miniature world made of basalt rocks, caper plants and Barbary figs. Those who choose to disembark at Alicudi will find a harsh and desert place with no roads and no means of transport, there they travel with mules.

For any information about our services do not hesitate to contact us!
We are here for this, or book your holiday

Our fleet for the Aeolian Islands

Sign up to receive all our news and offers! 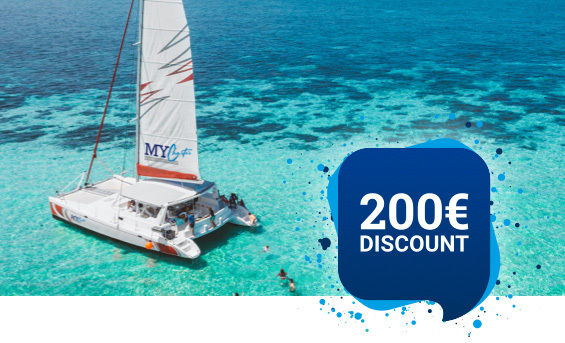 Get 200€ discount for your next cruise

Subscribe now to our newsletter to get your code for a € 200 discount for your catamaran holidays!